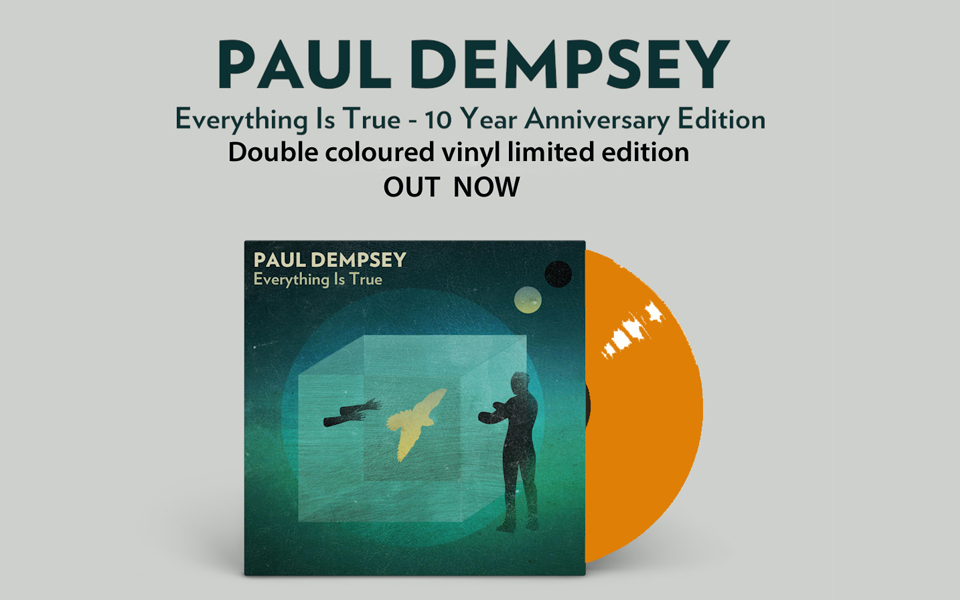 Whilst having a break from Something for Kate, in August 2009 Paul stepped out on his own and released his first solo album through EMI Australia. Titled Everything is True, it was co-produced by Paul and Wayne Connolly (You Am I, Youth Group) and mixed in Los Angeles at Sonora Recorders by Doug Boehm (Elliot Smith).

The first single released from the album was Out the Airlock, a beautiful, sparse folk- tinged track accompanied by some disarmingly dark lyrics while the second single, Ramona Was A Waitress, again displayed Paul’s lyrical originality as he sings about a futuristic robot waitress arguing about mortality. Further singles from the album were Fast Friends and Bats.

The critical response to the album was overwhelming, garnering 4 1/2 star reviews from publications ranging from Rolling Stone to The Age to The Australian. The album achieved Gold sales in Australia and continues to head towards platinum.

Everything is True debuted at No.5 on the Australian Record Industry charts and No.1 on the iTunes chart. The album has so far spent 15 weeks in the ARIA chart. Paul was nominated for 5 ARIA AWARDS (Australian Record Industry Awards) including for BEST MALE ARTIST, BEST ADULT CONTEMPORARY ALBUM & PRODUCER OF THE YEAR. The album won the ARIA for Best Engineer in 2010 for Wayne Connollys work in co-producing. Paul was also nominated for a Triple J Award for Best Australian album and was awarded The Age EG Music Award for Best Male.

Everything is True achieved gold status in 2009 & was named the Australian album of the Year by iTunes Australia while Triple J listeners voted the album in their Top 10 albums for 2009. Rolling Stone announced Everything is True as one of their Best Albums of 2009.

After completing numerous sold out Australian national tours and a wide selection of festivals since the release of the album Paul then toured in the US, Germany & the UK. Having moved to New York in 2010 where he toured the album for 2 years. Paul returned to Australia in 2012 to release & tour the 6th album for Something for Kate, Leave Your Soul to Science.

In February 2016, the first single, titled Morningless, was released from the album.

The album, Strange Loop and was released on Friday May 13 2016 through EMI Australia. The album’s opening track, The True Sea was given away as an instant grat track. The first single to be released on Feb 4th 2016 was Morningless.

After a sold out Australian cities tour, Strange Loop was released on May 13th. It received glowing reviews and debuted at No. 5 on the ARIA chart. The album heads towards gold sales.

Second single, Idiot Oracle was released from the album on May 30th.

Paul then did sold out shows in London, played festivals in India and embarked on a solo acoustic regional tour in early 2017.

Strange Loop was released in Germany, Switzerland & Austria in March of 2017 by Grey wood Records whereupon Paul did an extensive tour of those regions as well as more shows in the UK.

In mid 2018 Paul turns his focus primarily on writing for the upcoming Something for Kate album.

PAUL DEMPSEY – EVERYTHING IS TRUE

“It is a weapon sure to strike at the heart of any listener.” 4.5 stars The Music

‘Paul Dempsey retains his place as one of Australia’s best songwriters….immediately pleasing, but never predictable. It seems like Dempsey never takes the easy option when writing songs and it means that the songs have an extra kind of depth.’ Double J